From start to finish, 2021 was one wild roller coaster ride. Over the past 12 months, while the pandemic certainly stole most of the headlines, climate change also received its fair share of media coverage. Indeed, both field observations and scientific data are now reflecting more than ever the reality of climate change and its impact. The year that just ended was punctuated by extreme climate phenomena around the globe that were more pervasive, more intense and more frequent.

Despite the presence of La Niña, which leads to lower average global temperatures on a cyclical basis, 2021 was still one of the hottest years ever recorded according to the National Oceanic and Atmospheric Administration (NOAA), ranking 5th, 6th or 7th, depending on the data source. Even if the extreme climate events resulting from this warming were less pronounced in Quebec than elsewhere in Canada, the province actually experienced the most significant temperature anomalies, which directly affect the equilibrium of our ecosystems, water availability and public health. 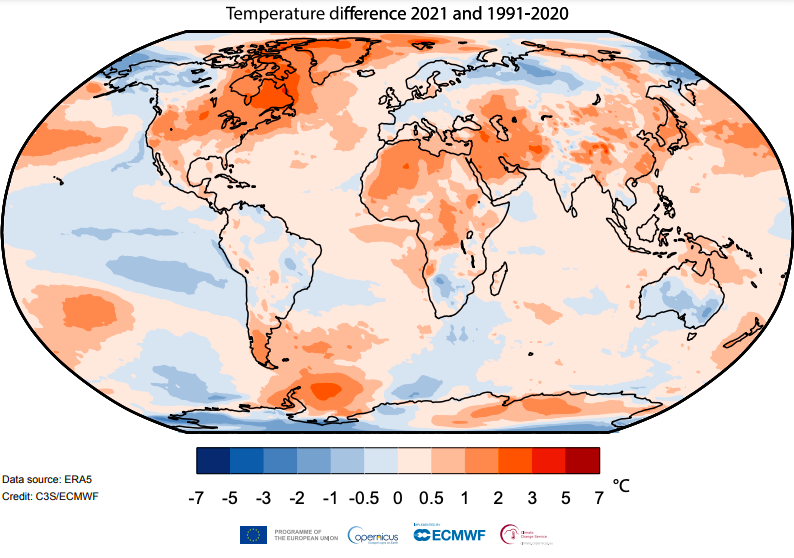 The 2021 synopsis should therefore be viewed as a reminder to remain vigilant, implement the necessary actions to rapidly attain carbon neutrality, and adequately plan the adaptation and risk-reduction solutions to manage the inevitable and increasingly tangible impacts of climate change.

According to the NOAA, July 2021 was the hottest month ever recorded on the planet. Around the globe, populations were affected by extreme events, including flooding in Europe and Asia, droughts and heat waves in most of the world’s regions, not to mention the recent tornadoes in the southern U.S. or the particularly active hurricane season.

In Canada, this excessive heat was particularly acute in the western parts of the country. It should be recalled that the town of Lytton, British Columbia shattered Canada’s all-time record high temperature when the mercury hit 49.6°C last June, before being destroyed by flames a few days later. This regrettable record adds to the numerous other climate events that plagued western Canada, which also suffered intense droughts, forest fires and atmospheric rivers that led to significant flooding.

Following these extreme phenomena, it is clear that the cumulative impacts of climate change are real indeed. The ripple effect is visible: rising temperatures exacerbate drought conditions, which in turn contribute to forest fires; once decimated, the forests are no longer able to retain rainwater flowing toward the valleys, which increases the risk of flooding.

For 2021, we would like to share three important publications that cover the issue from international, national and regional perspectives, respectively.

At the international level, the Intergovernmental Panel on Climate Change (IPCC) published last August its report emphasizing that, despite efforts to curb greenhouse gas (GHG) emissions to stablilize and limit climate change, temperatures will continue to rise until at least 2050. Warming will exceed 1.5 or 2 degrees in the course of this century unless radical efforts are made to reduce emissions over the next few decades.  Many of the changes brought about by past and future GHG emissions will be irreversible for centuries or even millennia to come, especially those pertaining to the oceans, ice caps and sea levels.

It is therefore inevitable that the impacts of climate change will continue to grow worse. The working group’s n.2 report on potential adaptation solutions to mitigate these impacts is expected to be released on February 21, 2022.

At the national level, the climate change report directed by Natural Resources Canada summarizes the most recent scientific data on climate change impacts, notably with regard to communities, the environment and the economy. The various sections of the report explore the most significant vulnerabilities of the country, the specific risks and challenges that we face, Indigenous knowledge and perspectives, as well as new and innovative adaptation approaches. The chapter dedicated to Quebec is expected to be published in 2022.

Last November, the Climate Change Advisory Committee made public the opinion that it had submitted to Quebec’s Ministry of the Environment and the Fight against Climate Change on carbon neutrality and the need to adapt. Drawing from current knowledge, the Committee notably recommends better tracking Quebec’s progress as it strives to become carbon neutral, more ambitious climate action, stronger leadership in the province and increased mobilization of the population.

COP26: A Long-anticipated Event
Following the publication of the IPCC report, the public eagerly awaited the 26th Conference of the Parties to the United Nations Framework Convention on Climate Change (COP26). For the occasion, decision-makers from around the world gathered to negotiate and conclude common agreements regarding strategies to keep warming within 1.5 degrees above the pre-industrial average. Ouranos took advantage of its presence at the forum to draw attention to the particular issues faced in Quebec as well as the consortium’s expertise during discussions with key players at both the national and international levels. These meetings also helped give added focus to adaptation in the course of climate change discussions.

Undeniably, the events that took place in British Columbia captivated the public’s attention. In light of the increasingly concrete and visible impacts of climate change, it is evident that there is an urgent need to adapt, for even if becoming carbon neutral will help stabilize the climate, GHGs will continue to accumulate and society must prepare and take action without delay. Quebec must not be deluded following a year without any major climate events. Over the next several years, it is highly likely that similar extreme climate events will also occur closer to home with equally significant impacts such as flooding, violent storms, heat waves, etc. Adaptation solutions need to be implemented rapidly.

It is in this context that Ouranos continued its mission over the past 12 months. With the completion of several research projects and the start of a new cycle including a completely revamped program, the consortium continues to collaborate with its many partners to promote science as well as adaptation solutions to help society invest more robustly in its infrastructure, ‘green up’ its cities, reduce pressure on its ecosystems, better manage its water resources, develop the land in a more sustainable manner, etc.

Naturally, the anticipated impacts in Quebec will vary considerably as a function of the adaptation and resilience strategies that various regions – regardless of whether coastal, agricultural, northern or urbanized – will adopt. For although technological innovation is crucial, change will not be possible without profound social innovations that bring about behavioural changes in terms of transportation, consumerism and the adoption of new technologies.

Just like we hear that we must learn to live with COVID-19, we must also learn to deal with climate change, though not without swift action on two fronts: drastically curbing our GHG emissions and implementing adaptation solutions. One cannot be achieved without the other, for the well-being of both the general public and our planet.