The climate of our planet is influenced by several natural factors, such as major volcanic eruptions, ocean currents and variations in solar energy. However, human activities such as the use of fossil fuels, agriculture and industrial activities, etc,  are causing an increase in the concentration of greenhouse gases in the atmosphere. Ever since the industrial revolution, this cause of climate warming has been 50 times more powerful than natural phenomena, acting with record speed compared to the last 2000 years. Thus, despite the presence of natural factors that influence the climate, there would probably be no global warming currently if it were not for human activities, as demonstrated by the figure opposite, from the Intergovernmental Panel on Climate Change (Figure 1). 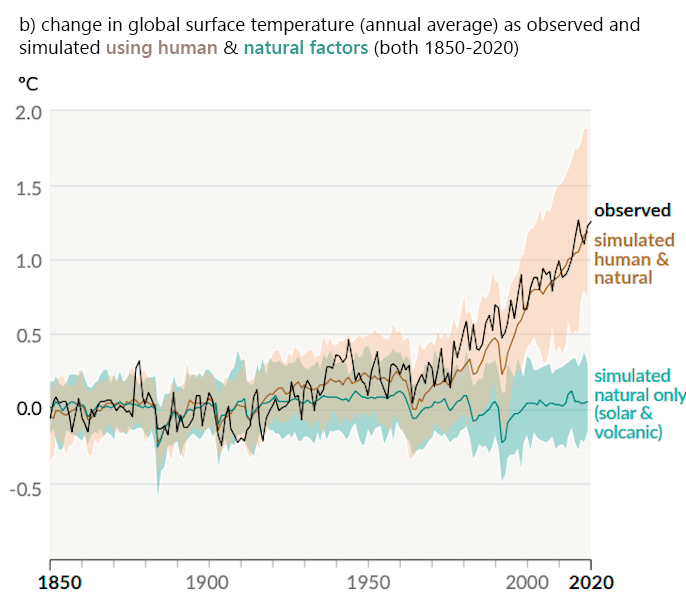 Figure 1 : Changes in global surface temperature observed over the last 170 years (black line) compared to the period 1850 to 1900. Simulated temperature changes including human and natural factors (brown) and including only natural factors like solar and volcanic activity (blue). The lines in the centre of the brown and blue envelopes indicate the averages of the simulations.

What is climate change?

Climate change is defined as an alterations to average weather conditions, extremes, and to the variability that persists over a long period of time, typically for decades or more. Climate change is leading to a long-term increase in global temperatures and sea levels, as well as changes in the intensity and frequency of certain extreme events such as storms and forest fires.

A look at the greenhouse effect

Some of the sun’s rays reach the Earth’s surface and warm it. Excess heat that the Earth cannot absorb is reflected back as infrared rays., Greenhouse gases, which are naturally present in the atmosphere, act as a blanket and trap the sun’s heat. As such, greenhouse gases are very aptly named, because they act in the same way as garden greenhouses. The best-known greenhouse gas is carbon dioxide (CO2), because of its predominance in the atmosphere, but there are several others such as methane (CH4) and nitrous oxide (N2O).

The greenhouse effect is a natural phenomenon that keeps the temperature warm enough to support life on Earth. However, since the beginning of the industrial period, greenhouse gas concentrations in the atmosphere have increased dramatically due to the use of fossil fuels such as oil, natural gas and coal, which has led to excessive climate warming (Figure 2). In other words, the “greenhouse gas blanket ” is thicker. This phenomenon is even more troubling because some of these gases have a long lifetime and will influence the climate for many years to come. 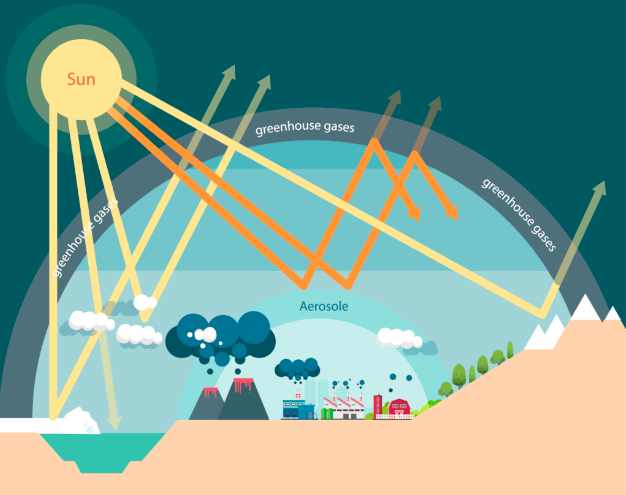 Since 1988, the Intergovernmental Panel on Climate Change (IPCC) has been assessing the available scientific information related to climate change in an unbiased and methodical manner. This information is drawn from studies published in scientific journals by experts in the field. The IPCC also works to identify elements that are the subject of a consensus among the entire scientific community.
Summary reports on the results are regularly published. In 2021, the IPCC published a report stating unequivocally that human influence has warmed the atmosphere, ocean and land and that changes in extreme events such as heat waves, heavy precipitation and droughts can already be attributed to it.

The consensus extends to related sciences: cryosphere analysis, hydrology, oceanography, geography and many others. The analysis of the results published in scientific articles reveals that more than 99% of these researchers agree that the planet is warming and that humans are the cause.

Learn more about the IPCC and its reports

What is natural climate variability?

The climate varies naturally on different time scales: by season, by year and by decade. Many of these variations are due to interactions between different components of the climate system such as the atmosphere, oceans, land and ice. Some phenomena occur cyclically. For example, the North Atlantic Oscillation manifests in cycles of about twenty years. This oscillation affects winter temperatures and precipitation as well as the depth of the snow on the ground in Quebec.

These natural phenomena can influence the climate over several years or even decades. Thus, they decrease or amplify the trend of global warming over a long period of time. These fluctuations are  misleading, so that is why it is  important to use at least 30 years of climate data to distinguish between natural variability cycles and climate change.