Skip to main content
What are the key takeaways of the IPCC report on climate change impacts and adaptation?
Publié le
14 March 2022
News

On February 28, the Intergovernmental Panel on Climate Change (IPCC) released the second part of its Sixth Assessment Report. This text covers impacts, vulnerability and adaptation as they relate to climate change.

The conclusions drawn by the report’s approximately 270 scientific authors are alarming: climate change is having significant detrimental effects on nature, the economy and human populations in every corner of the globe, with the most vulnerable groups of society being particularly affected.

Experts are unequivocal: the risks are serious, widespread, systemic and potentially irreversible. The scale and magnitude of the impacts are greater than what had been estimated in previous reports.
Widespread impacts, growing risks.

Throughout the world, the effects of climate change are increasingly visible. Rising temperatures are affecting ecosystems, biodiversity and human populations. According to the IPCC, even under the most optimistic climate scenarios, temperatures are expected to rise through at least 2050. The objective of +1.5°C is looking increasingly beyond reach and many researchers are predicting figures more in the order of 3°C. According to the IPCC, the repercussions of such warming will be manifold.

An uptick in the frequency and intensity of extreme events brought about by climate change is expected, whether it be in the form of heat waves, droughts, flooding, forest fires, etc. A certain impact will be observed on infrastructure, agriculture, water availability and transportation, which could cause breakdowns in the supply chain and ultimately heighten food insecurity.

Observed changes in air, soil, freshwater and ocean temperatures will contribute to alterations in the structure of ecosystems and the distribution of species. Higher temperatures will push a number of species to the limit of their adaptation ability. Species that are incapable of adapting risk disappearing altogether. The ranges of species across the globe are therefore likely to shift.

However, it is important that these risks be viewed not individually, but as a whole that can generate cumulative effects, as was the case in western Canada last year. The ripple effect is easy to see: rising temperatures exacerbate drought conditions, which in turn contribute to fires in subsequently degraded forests; once decimated, these forests are no longer able to retain rainwater flowing toward the valleys, which increases the risk of flooding.

Undeniably, all these climate transformations also have a consequential impact on the health and well-being of populations, notably the most vulnerable. The IPCC further points out that extreme events can lead to significant mortality or facilitate the emergence of disease, in addition to triggering anxiety or psychological trauma.

The province is no exception and a number of impacts being observed are consistent with global climate trends. Infrastructure failures, overloaded sewer systems, health issues related to extreme heat, declining agricultural yields, coastal erosion, loss of wildlife habitats, etc…. These are just a few examples of the consequences of climate change that are already being felt in Quebec.

If global warming exceeds the 1.5°C target stipulated in the Paris Agreement, this could translate into a temperature increase of up to 7°C in the most affected regions under the worst-case scenarios. The numerous impacts to come will have consequences on the built environment, economic activities, the health and safety of Quebec citizens and the quality of our ecosystems.

Naturally, these anticipated impacts will vary considerably depending on the adaptation and resilience strategies that towns and regions across Quebec – regardless of whether coastal, agricultural, northern or urbanized – will adopt. Many encouraging initiatives are already being deployed across the province and are beginning to inspire a new generation of players in the field of climate change adaptation.

As part of a series of reports entitled Canada in a Changing Climate, Natural Resources Canada will soon propose a chapter dedicated to Quebec that summarizes what we know about the observed and anticipated impacts of climate change on the province’s human population, its natural and built environments, its economic sectors as well as adaptation measures and initiatives. The text presents the latest knowledge as well as the results of research published since the most recent edition of Ouranos’s report Synthesis on climate change knowledge in Québec (2015 edition).

Urgently adapting: Is it too late?

The urgency and complexity of the climate crisis call for actions of unprecedented depth and magnitude. Together with GHG reduction efforts, the implementation of adaptation measures is an opportunity that decision-makers the world over must seize. Fortunately, a number of governments and grassroots organizations have already embarked on this path.

Indeed, since the publication of its previous report, IPCC experts have noted a growing number of adaptation measures around the world. Progress can be seen, for example, in new habitat management practices that favour water retention in wetlands and other natural environments to prevent flooding, or the implementation of conservation, protection or restoration measures of certain ecosystems to help them adapt to the impacts of climate change.

Although increasingly common, these solutions are oftentimes too small in scale, marginal and/or reactive in nature. Their scope is insufficient to offset the impacts of higher temperatures. In other words, the impending risks require more substantial and transformative changes in our behaviours and in our infrastructure, which must take the climate change scenarios into consideration. Adopting ambitious solutions is therefore essential to rapidly adapt according to a long-term vision. This will help boost resilience, reduce risks to tolerable levels and ensure that objectives can be reached in a manner that is equitable, inclusive and just.

The report also notes that by promptly investing in adaptation, the world will avoid even higher costs in the future, as the potential advantages of adaptation activities outweigh their costs over the long term. Moreover, adaptation can produce multiple benefits. Lastly, the report once again confirms that beyond merely understanding the impacts, science can also serve to develop integrated solutions. 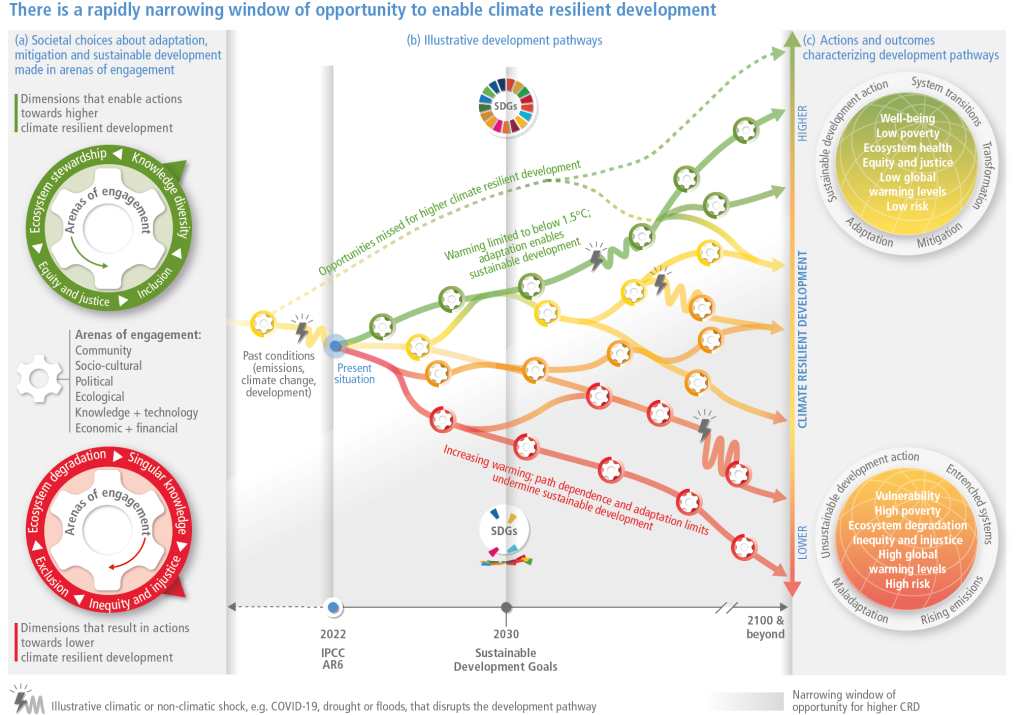 About the Group 2 report

Signed by over 270 scientists from 67 countries and 675 contributing authors, the complete report contains over 34,000 references and features 62,418 observations made by experts and governments. It was approved by the 195 member governments of the UN.